The already shown similarities in hue, nuance, blackness, chromaticness and whiteness are NCS elementary attributes and are naturally found in the NCS Colour System.

The NCS System gives many other opportunities to experiment with colour combinations and harmonies. You can choose two colours with the same amount of blue (60% resemblance to blue) like R60B and B40G.

CLOSE RELATED COLOURS
Close related colours are colours that are within 10 steps in the colour circle. They don’t need to be placed in the same quadrant between two colours like R and B. They can start wherever on the circle, but you have to keep the maximum distance of ten steps.

OTHER COLOUR SIMILARITIES
There are also other colour similarities that can be defined in the NCS System though they are not an elementary attribute of the NCS System like saturation similarity, lightness similarity and complementary colours.

COLOURS WITH THE SAME SATURATION
There are different definitions of visual attribute saturation. Historically, and especially among artists, saturation means a colour that is strong chromatic. Today however we can find many different colours named saturated colours. It is a lot of your personal preferences.

Find here two common definitions of saturation:
• Saturation in general
the chromaticness/colourfulness of a colour percept judged in proportion to its brightness

• Saturation defined in NCS
attribute of a chromatic colour percept expressing the relationship between its chromaticness and whiteness. This is the same definition as an artist when he/she is working with a shadow series in a painting.

If whiteness and chromaticness are perceived as having the same proportional relation to each other when blackness varies, we speak of colours with the same saturation. In the NCS triangle, they are found on a straight line through from the black point S to a given place on the scale between W and C. The saturation, which is designated by m, is expressed by m = c/(c+w) or m = c/(100-s).
An example: 4030-Y90R has m = 0,5 and 6020-Y90R has m = 0,5.

COLOURS WITH THE SAME LIGHTNESS
A difference in lightness between two colours is probably the most important factor contributing to the visual experience of a pattern or a form. Lightness shows how two colours contrast each other. It is also vital for the design and colour schemes of exterior and interior environments, not least for weak-sighted persons (e.g. the elderly) who need lightness contrast between different surfaces to be able to orientate themselves.

Lightness is not the same as whiteness. Whiteness and blackness are quality attributes in the same way as yellowness, redness, blueness and greenness which will characterize a colour. Lightness is not a quality of a unique colour but can be determined by comparing it to greyscale or through instrumental measurement. A yellow colour has an inherent lightness and a blue colour has inherent darkness. 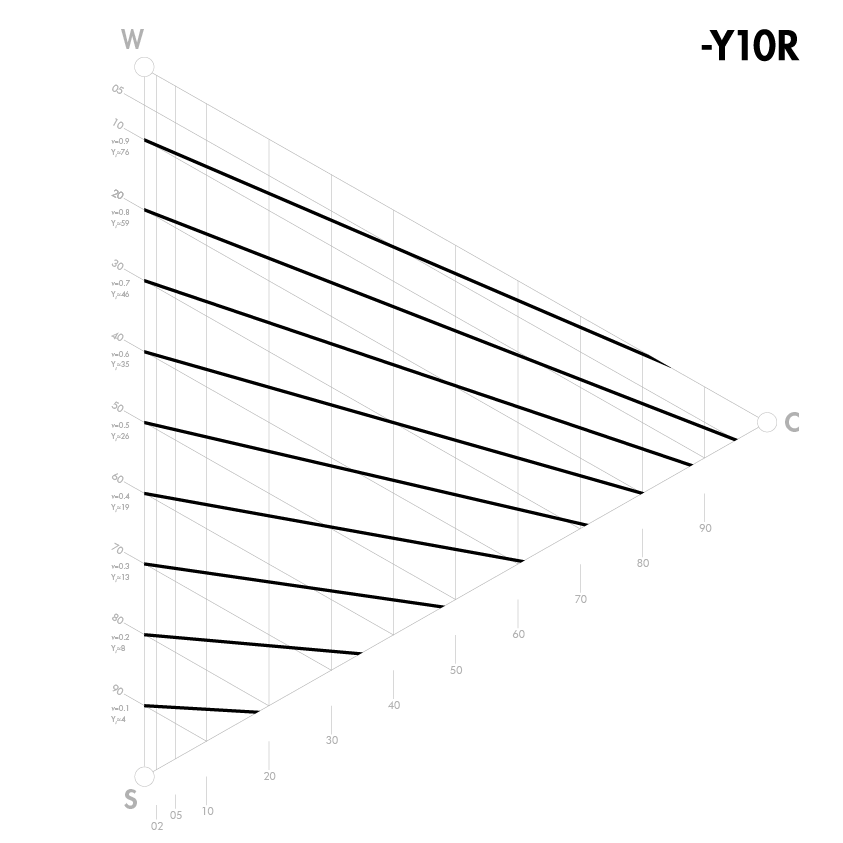 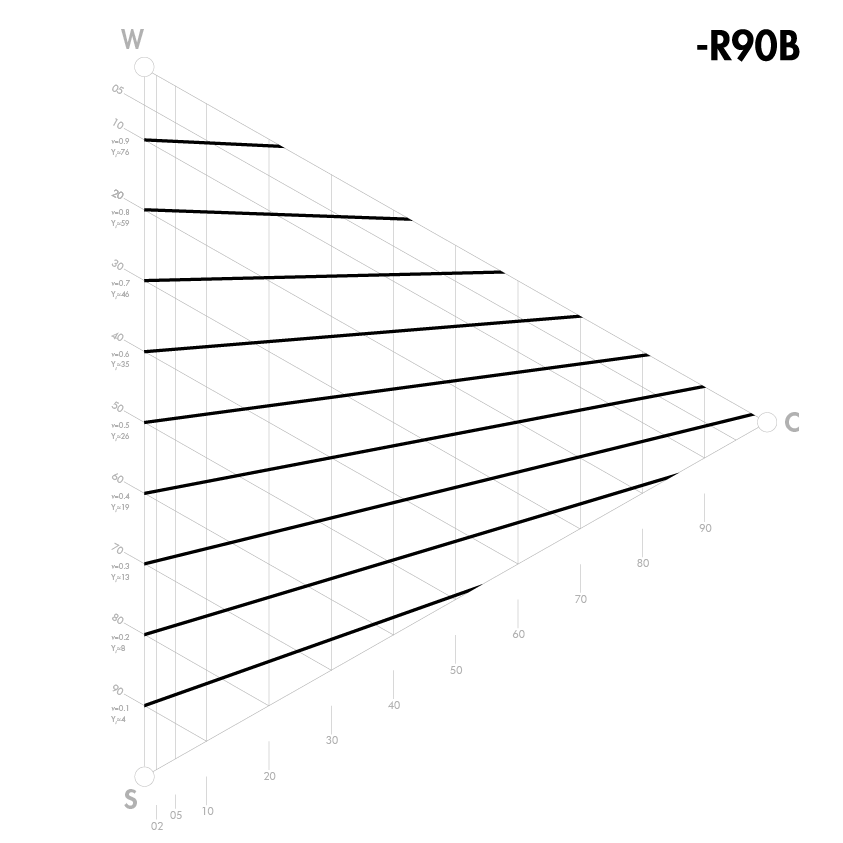 Since lightness is not an elementary attribute, it is not described by the NCS notation nor is it directly indicated by the NCS symbols. In the NCS Atlas, the colours which are alike in lightness are indicated with lines in each colour triangle. The NCS lightness value is indicated with a ν in the NCS Atlas between W and S on the left-hand side of the triangle. There is also a lightness scale (NCS Lightness Meter) with 18 different steps which is a good aid in assessing the lightness of different colours.

COMPLEMENTARY COLOURS
Complementary colours are defined in many different ways in literature and reference works. When described as after images you will find them when straight lines are drawn between the pairs of perceived hues of complementary colour stimuli, they all intersect in a point with the approximate position chromaticness = 20, hue = R75B.

So they are not exactly opposite colours in the circle since the point is not in the centre of the circle. This is because NCS is not constructed according to the complementary colour theory and colour mixing principles.

We use cookies to enhance your experience. By continuing to visit this site you agree to our use of cookies. More info

Download your NCS Article by filling out the form.

Do you really want to cancel your subscription?